HAWKINSVILLE, Georgia (41NBC/WMGT) — Families of people with compromised immune systems are being harshly impacted by the COVID-19 pandemic. Those with cancer, diseases, or medical conditions are more likely to contract infections and viruses.

Jerry Davis was diagnosed with nasal carcinoma in 2010, which grew into a massive tumor from his sinus cavity into his brain. After surgery to remove the tumor, the nasal carcinoma metastasized to bone. Davis has been dealing with cancer and kidney disease ever since.

After taking an experimental oral chemo treatment, Davis started experiencing extreme side effects. His family then had to decide whether to send him to the hospital or not.

Davis’s sister, Vicky Greene says although her family was nervous about possible exposure to COVID-19, they knew her brother needed help.

Davis was taken to Taylor Regional Hospital in Hawkinsville, where he began receiving treatment for a colon infection. 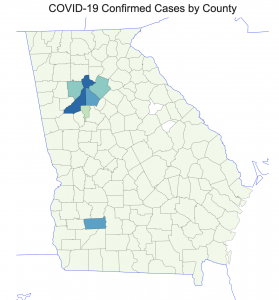 Taylor Regional Hospital is among several other hospitals in Middle Georgia, to restrict access to their facilities. Hospital staff is not allowing any visitation at this time. If a patient needs items from home, family members must drop it off to the registration area of the hospital before 5:30 p.m.

Greene says not being able to see her brother in the hospital was hard but says it was even more difficult for Jerry.

“It was just really incredibly difficult, to not be able to just go out there and be with him,” Greene stated. “It was lonely for him as well. He has shared that with us, that although he had nurses and a great team of people taking care of him, it’s not the same as having your family with you.”

Jerry Davis was released from the hospital on Monday. He is now receiving treatment at home.

The Davis family is asking for continued prayers and support during this time.