MACON, Georgia. (41NBC/WMGT) – The first named storm of the season, Subtropical Storm Alberto, made landfall along Panama City Beach in Florida Monday afternoon. Since traveling over land, it has weakened to a subtropical depression.

As of Tuesday morning at 7 a.m, the tropical system had sustained winds of 30 mph and was moving north/northwest at 13 mph. 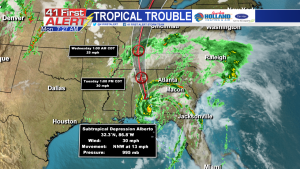 Though it is expected to continue traveling north, Alberto’s rainbands will spiral across the southeast through mid-week.

The Flash Flood Watch in effect until Wednesday morning has been extended to include Houston and Dooly county. 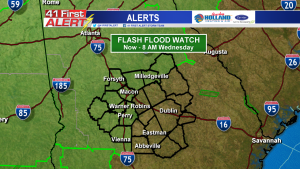 Widespread showers and storms are likely through the middle of the week. The rain chance will start to drop by the end of the work week and heading into the weekend. Middle Georgia should start to see more sunshine, resulting in an upward trend in temperatures. 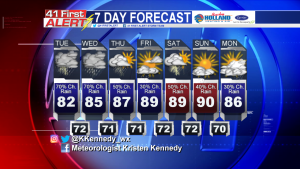