According to a letter from Superintendent, Brett Lowe, the student plays on the Crawford County Middle School football team. The student is isolated at home and the school’s football program is shutdown until August 24th.

The letter goes on to say that anyone who had contact with that student has been notified and told to quarantine for 14 days.

Lowe says the school district will continue to follow guidelines set by the Centers for Disease Control and Prevention and the Department of Public Health.

Lowe asks that parents continue to reinforce health habits with their children like hand washing, social distancing, and wearing a mask when necessary. He said if a child has direct contact with someone infected with COVID-19 or they start showing symptoms of the virus, parents should not send them to school. 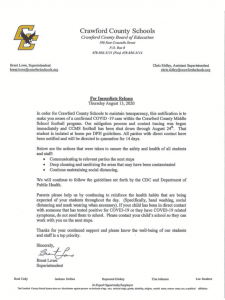 [field59_video account="WMGT" key="0b9678edf6a1588302549c54c073f50567f425be" vtitle="Milledgeville 11-year-old heading to Junior Olympics in Texas" thumb="https://redirect.field59.com/image/med/4f63d59340ab6c9d3ec31b6a2b3d09ae74a4efcd"] MILLEDGEVILLE, Georgia (41NBC/WMGT)— 11-year-old Valynsia Calhoun began her journey in track and field at just 8 years old. She says her love for running came from her family. Now with her family's support, she has raised nearly $1,000 to fund a trip to Texas next month after qualifying for the Junior Olympics. Valynsia says getting where she is hasn't been easy. "I train at least three or four times a week, usually once or twice with my coach, a few times by myself," she said. Valynsia has won several medals already and will be competing in the 80m hurdles and long jump this year. Although the goal is to win, she just wants to give it her all and have fun. Willynda Calhoun, Valynsia's mother, says they wanted to do everything they could to support her. "We're very proud of her, she has been determined each time, and she says her goal is not actually winning, but as long as she gets better each time, so with that mindset we're just very proud of her." Valynsia's Coach, Steven Franklin, says he's proud of how much she has accomplished in such a short amount of time. "We sat down one day and we talked, and I said, 'Hey do you think you might want to go to the Olympics some day or do it in college?' And she said yes, so I said, 'Well we have to start training as if you're already in high school.'" Franklin says they are working twice as hard each day. As Valynsia prepares to head to the Junior Olympics, she is hopeful that one day she will compete in the Olympics. Her competitions are August 3-5.