One person dead, one person injured after car crash on GA 22 in Crawford County

CRAWFORD COUNTY, Georgia (41NBC/WMGT) — One person is dead and another person is injured after a car crash in Crawford County.

According to the Georgia Department of Transportation, the crash happened on state route 22 at Billy White Road in Roberta.

According to a tweet from the Georgia Department of Transportation, the crash blocked all lanes on that part of GA 22. The lanes should be cleared by 10 Tuesday morning. Officials with GDOT are asking drivers to use an alternative route. 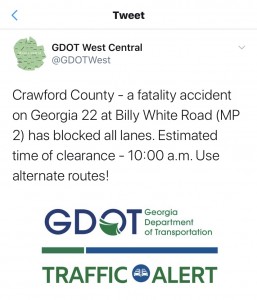 Coroner Sheldon Mattox also told 41NBC that the Georgia State Patrol is investigating the crash. We reached out to the GSP and will update this story once we have more information.