MACON, Georgia (WMGT/41NBC) – A child who went missing out of Northeastern Georgia Thursday was found safe in Middle Georgia.

According to a post on the Banks County Sheriff’s Office Facebook page, 9 year old Gabriel Salas was taken from Highway 63 in Banks County in Chevy Impala. The post said the car could have been traveling to south Georgia or Florida.

Thursday night, the Banks County Sheriff’s Office posted on Facebook that Salas was found safe on Gray Highway in Macon and two suspects were arrested. 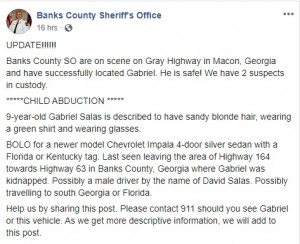