FORSYTH, Georgia (41NBC/WMGT) – According to the Monroe County Sheriff’s Office, 22 year old Mikayla Singletary, of Forsyth, was killed in Wednesday night’s car wreck. An email from the Sheriff’s Office said the crash happened just after 10 p.m. The email says Singletary was driving on Highway 42 near mile post 19 when the car went off the road, hit a tree, stopped in a ravine and then burst into flames.

According to the Sheriff’s Office, Singletary was driving the car and was the only person in it.

The crash is under investigation.

FORSYTH, Georgia (41NBC/WMGT) –  At least one person is dead after a car wreck involving a tree in Monroe County.

According to a tweet posted by the Georgia Department of Transportation, all lanes were blocked on Georgia 42 near Sydney drive late Wednesday night. The tweet says the lanes were blocked because a fatal accident involving a downed tree. GDOT says an investigation took place at the scene and the lanes were re-opened early Thursday morning. 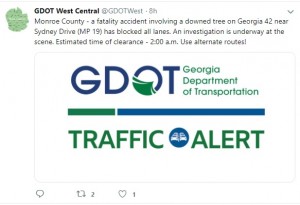