It was reported that the couple was in the store the day before the puppies were taken, inquiring about the puppies. After further investigation, it was discovered the Causey’s made several anonymous calls to the pet store Wednesday, in reference  to the returning of the puppies.

MACON, Georgia (WMGT/41NBC) – Two puppies who were stolen from a pet store in Macon have been returned.

According to the Bibb County Sheriff’s Office, the two golden doodle puppies were found in front of a Domino’s restaurant, right next door to the pet store, Janine’s Noah’s Ark. Deputies say when they arrived just before 9 Wednesday night, the puppies were in crates and appeared to be unharmed.

The puppies were first reported stolen on Sunday, when Janine’s Noah’s Ark posted about the dog-napping on its Facebook page. The store owner says, someone broke into the store’s front window and stole the puppies. The owner even offered a reward for their return. 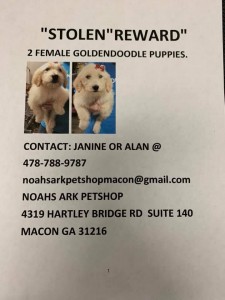 Deputies are looking for the person who returned the puppies. If you know who they are, call the Bibb County Sheriff’s Office at (478)751-7500 or call the Macon Regional Crimestoppers at 1-877-68CRIME.