HAMPTON, Georgia (41NBC/WMGT) – Expanding gambling in Georgia to include casinos, sports betting and horse racing has been a topic of discussion for years and a hot button issue that’s sure to come up during this year’s state legislative session. Even though there isn’t a law allowing any of that right now, Atlanta Motor Speedway in Hampton has an idea that the staff hopes attracts lawmakers and voters alike.

The speedway would like to open a destination resort, in addition to the one and half mile race track it already has on site. The resort would have a casino and hotel, but it would also include other attractions outside of gambling. A rendering of the project shows an indoor/outdoor water park, a concert venue, and a night club, just to name a few.

“You could come and enjoy it for gaming or you could come just for the show, bring your family and do the water park and other activities and not even have to go into the casino.” said Atlanta Motor Speedway Track President, Ed Clark. 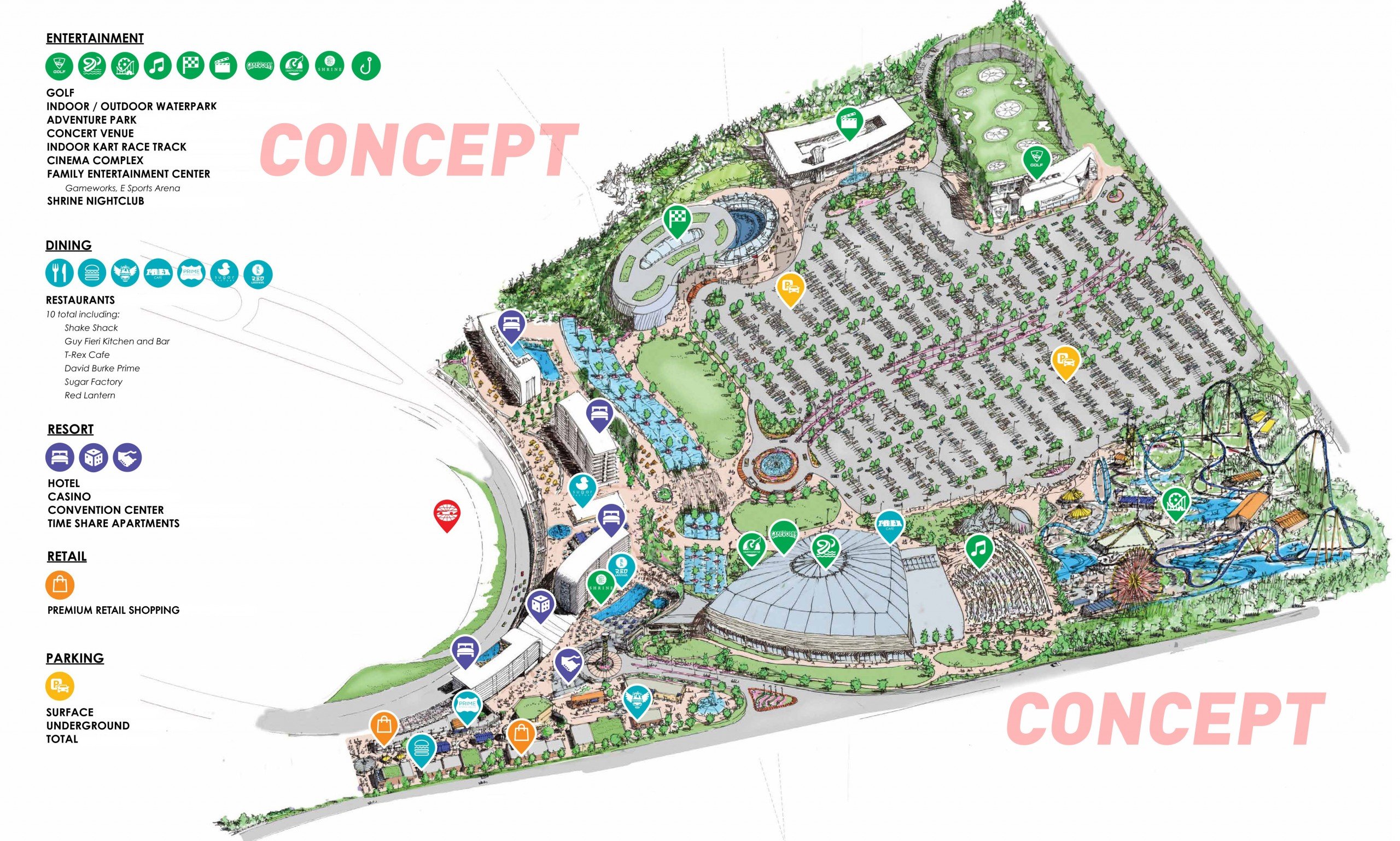 Clark thinks this resort will make Atlanta Motor Speedway a destination for people during the entire year, not just when the track hosts its NASCAR race weekend in the spring. This isn’t the first sports complex to do something like this. Kansas Motor Speedway has its Hollywood Casino, with entertainment and dining included. Dover International Speedway in Dover, Delaware has Dover Downs Hotel and Casino, which has horse racing, entertainment and spa. SunTrust Park in Cobb County, where the Atlanta Braves play, has the Battery, which includes several different shopping and dining options throughout the year.

Clark says the idea was not sparked because of those other year round entertainment complexes. “The idea began with Foxwoods,” he said.

Foxwoods is a resort and casino in Connecticut. It offers dining, shopping and activities for its guests, in addition to its casino. Clark says Foxwoods has been a sponsor of one of Atlanta Motor Speedway’s sister tracks, New Hampshire Motor Speedway in Loudon.

“They were looking for a new location and knew that there was the potential that gaming would be potentially coming to Georgia,” said Clark. 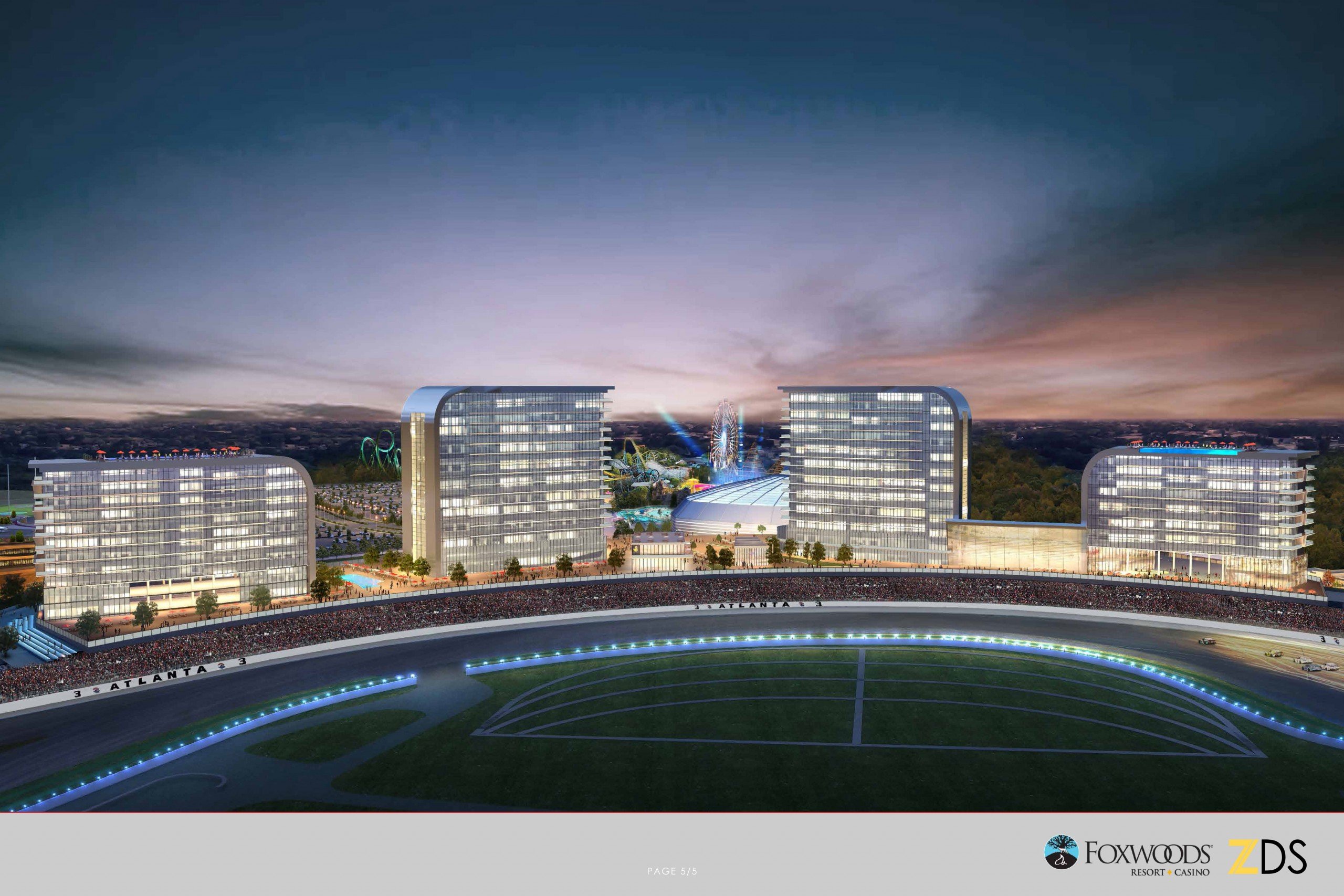 Although casino gambling is not legal right now in Georgia, there are lawmakers in Atlanta looking at that very topic. The Special Committee on Economic Growth is a committee made of 15 Georgia House of Representatives. Rep. Miriam Paris of Macon, Rep. Dale Washburn of Macon, Rep. Shaw Blackmon of Bonaire, and Rep. Rick Williams of Milledgeville are members of the special committee. The committee will be holding a public hearing Thursday, January 9th at Atlanta Motor Speedway to discuss a constitutional amendment on casino gambling, sports betting and horse racing in Georgia.

“It’s really to gather input from the local community so the legislators have a good feeling on how people in Georgia feel about this as they go into the session,” said Clark.

Voters would have to decide if gambling should be expanded, which Clark is optimistic they will be in when they take to the polls in November.

If gambling does expand in Georgia, Clark believes the project could cost $1 billion dollars. He says the entertainment complex could create up to 3,000 construction jobs and up to 4,000-5,000 jobs when its operational.