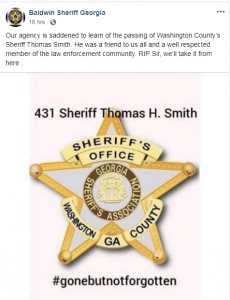 According to Washington County’s website, Smith was a county native and had a long history in law enforcement. He established the C.H.A.M.P.S. program in Washington County, organized the county’s first K9 unit and implemented a neighborhood watch program, just to name a few.

Sheriff Smith was a graduate of the National Sheriff’s Academy, has a Bachelor’s degree in Criminal Justice from Georgia Southern University and Master’s degree in Public Administration from Columbus State University.

The cause of Sheriff’s Smith death is unknown at this time.