"We think it is great for the property owners to reduce millage rate in 2022 by 5 mills."

MACON, Georgia (41NBC/WMGT)— The Other Local Option Sales Tax, also known as the OLOST, would add an extra penny onto a bill for anything purchased in Macon-Bibb County. If it passes, the county starts collecting sales tax from the OLOST in January.

Representatives Dale Washburn, Robert Dickey, and Danny Mathis sent a letter to the Mayor and County Commissioners, asking them to reduce the property taxes by 5 mills in 2022. 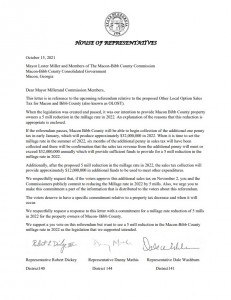 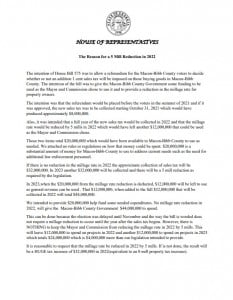 “We think it is great for the property owners to reduce millage rate in 2022 by 5 mills rather than waiting until 2023,” said Representative Washburn.

Representative Miriam Paris fully supports the OLOST, and says it will give the county tax relief at the appropriate time. Representative Paris says she and the rest of the delegation didn’t know anything about the letter though.

“You just have three from a delegation of eight. I don’t know, I just think that as the young folks say we probably just need to stay in our lane on this one,” said Representative Paris.

He says even though it would come from sales tax, it equates to a millage increase of 7 to 8 mills. Representative Washburn says he’s in favor of the OLOST, but if the county did collect $44 million, it would go against the original intent of the legislation.

“That’s really what this comes down to is us asking them to reduce the millage rate by 5 mills in 2022 which will take care of that,” said Representative Washburn.

Representative Paris has the perspective of currently serving in the State House and previously serving on Macon City Council. She understand how important this is for both sides.

“It’s a very complex situation and I just trust they’re going to do what’s right for Macon and Bibb,” said Representative Paris.

Representative Washburn says they do not have any restrictions on how the county will spend the funds from the OLOST if it passes. He also doesn’t believe they’re micromanaging by asking the Mayor and Commissioners to do what the legislation intended.

“I do not see it as micromanaging to want the reduction to come as soon as possible,” said Representative Washburn.

Mayor Miller did not comment on the letter when we asked him about it.

Early voting is still going on for the OLOST. You have until October 29 to vote early. Election Day is November 2.