Hurricane Bud was churning the sea west of Mexico Tuesday morning as a Category 4 hurricane with winds of 130 mph. It is expected to move northwest towards Cabo San Lucas, Mexico and continue weakening as it moves inland. 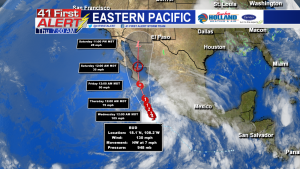 Meanwhile, there is an area of disorganized showers and storms associated with a low pressure system in the western Caribbean Sea.

While the National Hurricane Center is giving it a low chance of formation in the next 2-5 days, there may be potential form development farther out as the system moves towards the western Gulf of Mexico.

The Gulf of Mexico’s waters are very warm, and tropical systems thrive off the energy that the Gulf’s warm waters provide. This will definitely be a system to watch as time progresses. 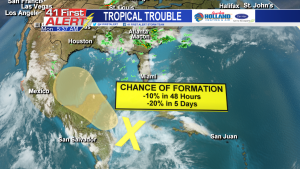 Obviously, Hurricane Bud will have no impact to Middle Georgia as it is on the other side of the nation, in a completely different ocean.

The low in the Caribbean, though, may spin up even more tropical moisture across the southeast. Rain chances will continue daily through early next week. [Watch video link for today’s full forecast.] 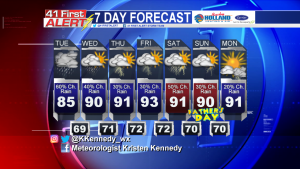 NOAA’s Climate Prediction Center has released an outlook for precipitation from June 17-21. There’s a higher chance that Louisiana and Texas will receive above average rainfall amounts (most likely due to the tropical low trying to form in the Caribbean). Middle Georgia is forecast to have either a very small chance of above average rainfall or near normal rainfall. 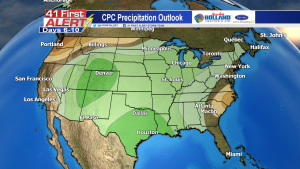