WARNER ROBINS, Georgia (41NBC/WMGT) — A 21 year-old Warner Robins man hasn’t been seen since the morning of February 9th, and the Warner Robins Police Department is asking for the help of the public in finding him.

According to the WRPD, Gabriel Wade was last seen leaving his residence at 210 Southland Station in his 2015 Green Toyota Corolla with a tag of CPU1494.

A photo of Wade is attached, he stands at 6 feet tall and weighs 150 pounds.

Wade is considered a missing/endangered person, anyone with information as to his whereabouts is urged to call the Warner Robins Police Department. 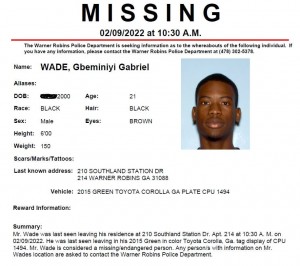