CRAWFORD COUNTY, Georgia (41NBC/WMGT) – One man is dead and another is behind bars after a domestic dispute in Crawford County Friday morning.

58-year-old Thomas Gary Palmer of Lizella was arrested after a shootout with police near a business on Klopfer Road near Harrison Road.

According to a news release by the Monroe County Sheriff’s Office, once officers located Palmer after a search, Palmer fired at them with a handgun. Deputies returned fire, and Palmer would eventually drop the weapon.

Deputies then attempted to place Palmer under arrest when the suspect presented a second weapon that was hidden. After a fight between the suspect and police, Palmer was eventually placed into custody without further incident.

Neither the deputies nor the suspect were injured during the altercation.

Earlier that morning, deputies found a 55-year-old man dead in a home on Berlyn Drive off of Boy Scout Road. Authorities say the man died from a gunshot wound.

The Georgia Bureau of Investigation is handling this case.

Charges are pending. The suspect is behind bars at the Monroe County Sheriff’s Office. 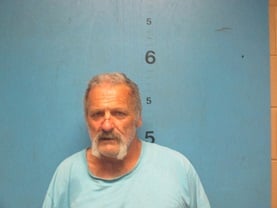