PERRY, Georgia (41NBC/WMGT) — A man has been arrested after pulling out a gun and shooting at several people at a block party in the early hours of Sunday.

According to a release from the Houston County Sheriff’s Office, a 911 call came in around 12:50 a.m. on Sunday in reference to a gun firing at a social gathering in the area of the 400 block of Hodge Road in Perry.

Deputies arrived to find a large block party being held as part of Henderson Day, which families in that area celebrate.

First, there had been an altercation involving 2 females, that led to a gun being drawn– family members de-escalated the situation by shutting down the event for the night. A second altercation began as a result between 32 year-old Tarovis Releford and members of the family trying to end the event.

During this second altercation, Releford shot at people that were fleeing the area. Nobody was injured during the incident, but some property was struck by bullets.

Releford is being charged with aggravated assault, reckless conduct, and criminal damage to property. He is being held at the Houston County Sheriff’s Office Detention Center. 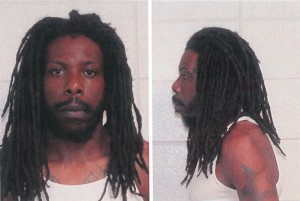