WARNER ROBINS, Georgia (41NBC/WMGT) – The Houston County District Attorney’s Office along with Macon Regional Crimestoppers, is offering $8,000 for information leading to the arrest in connection to a missing woman.

The Warner Robins Police Department says Bula Mae Robertson was reported missing by her daughter on October 5, 1993. She was last seen at her home on 219 Peachtree Circle in Warner Robins.

Foul play is suspected in the disappearance of Ms. Robertson.

She was 37-years-old, 5 feet 4 inches tall, and weighed 110 pounds when she was reported missing.

If you have any information about this case, call the Warner Robins Police Department at (478) 302-5380. Or you can call Macon Regional Crimestoppers at 1-877-68CRIME. 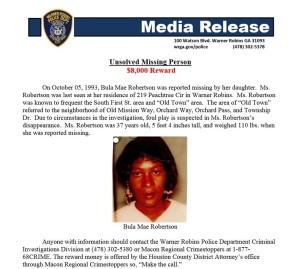