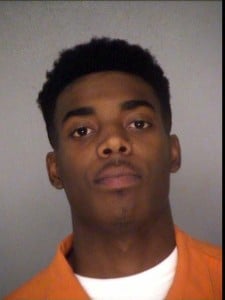 22-year-old Kenyatta Sharroid Jones Jr. of Macon was arrested Thursday morning after deputies spotted him at a store near the corner of Mumford Road and Napier Avenue.

Jones is charged with murder and is being held without bond at the Bibb County Law Enforcement Center. Deputies say he also had a warrant from an unrelated burglary case.

Deputies say they arrested 24-year-old Brandon Matthew Tyler with the help of a tip from the Macon Regional Crimestoppers.

Authorities found Tyler at the Park Apartments on Northside Drive.

Deputies took Tyler to Bibb County Jail and charged him with Murder. He also had a warrant for a Probation Violation on an unrelated case.

He is being held without bond.  The incident is under investigation.

If you have any information about this incident, call the Bibb County Sheriff’s Office at 478-751-7500. You can also call Macon Regional Crimestoppers at 1-877-68CRIME.